Headsets are Malfunctioning But Joe Judge has Excuses Headsets are Malfunctioning But Joe Judge has Excuses

Joe Judge would want to call a timeout on whoever is in charge of the Headsets. The Giants would not be burning all of their timeouts if it weren’t for them. After the Giants’ 20-17 loss to the Chiefs on Monday night, the judge acknowledged much. The Giants had already used two of their three timeouts before the 10-minute mark of the second quarter, both on defense due to miscommunications while trying to make substitutions. So the Giants just had one timeout left when they got the ball after the half with less than two minutes to go.

The Giants trailed 14-10 at halftime after their offense stuttered for a few plays, and Daniel Jones kneeled to run out the clock. This isn’t the first time the Giants have gotten themselves into trouble this season by calling timeouts at inappropriate times. Unfortunately, it’s been happening a lot lately. According to the judge, it’s not the fault of any Giants coaches, but rather something computerized. So far, this has happened in every game. 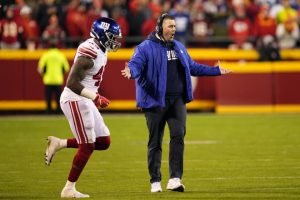 We deal with the league, and they keep informing us of various software changes. According to the judge, the Giants had to call two timeouts because their Headsets weren’t “getting reception” when they tried to make replacements. Judge only mentioned those two instances on Monday night as times when he felt the technology failed him, even though he’s had troubles at every stadium this season, home and away.

The Giants attempted to revert to previous season’s equipment – Judge stated that he would not have any concerns in 2020 — but the NFL declined their request. This reminds me of a time when Ben McAdoo was the Giants’ head coach. When the Giants’ Headsets failed during a game in 2016, McAdoo and his staff began utilizing walkie-talkies instead.