For the first time ever, inclement weather caused a flight delay on another planet. According to NASA, the Ingenuity helicopter, which was supposed to take to the skies of Mars on January 5, had to postpone its 19th mission due to an exceptionally violent regional dust storm on Mars. The crew is now expecting the flight to take place on Sunday, January 23. Despite the fact that Mars is smaller and has a less dense atmosphere than Earth, the red planet still has seasons, powerful winds, dust storms, and ice clouds.

Orbiters circling the planet and instrumentation onboard missions like the Perseverance rover and InSight lander are helping scientists better understand weather on Mars, but forecasting weather on another planet is even more challenging than forecasting weather on Earth. Understanding weather and seasonal variations ahead of Ingenuity past 18 flights has been critical to its success. 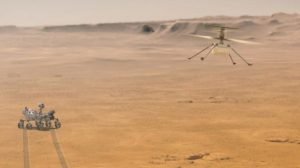 On Mars, the small 4-pound (1.8-kilogram) helicopter has flown through spring and summer, and fall will begin on February 24. On Mars, the air density swings through a cycle of ups and downs as the seasons change. When it comes to estimating suitable circumstances for flying on Mars, air density is one of two critical considerations. MEDA, or the Mars Environmental Dynamics Analyzer, is a meteorological station aboard Perseverance that helps NASA researchers analyse air density and wind speed over the course of a day, as well as how they change as the seasons pass.

Autumn on Mars is known as the “dusty season” because the amount of dust lofted in the atmosphere grows globally and stays that way through the winter. The greatest danger to Mars missions is dust. The Opportunity rover’s spectacular 15-year mission came to an end in 2019 when a planet-encircling dust storm drained and prevented its batteries from recharging.