Ocado has cancelled thousands of orders after a fire at a fulfilment centre in south-east London on Friday.The online grocer said the blaze started when three of the robots that help pick its groceries collided at the Erith site.About 800 staff had to be evacuated and firefighters worked through the night to contain the incident.It is the second fire involving robots at Ocado. Its Andover facility burned down in 2019 after an electrical fault.

Shares in the company slipped by about 3% in early trade on Monday. Ocado handles up to 150,000 orders a week at the Erith warehouse. The company said the fire would disrupt operations but that it was working to restore normal service as soon as possible. 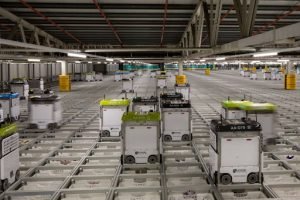 We expect the facility to begin operating within the coming week and thank customers whose orders are affected for their patience. We would like to also thank the London Fire Brigade and all the other emergency services for their hard work and professionalism in dealing with this incident.

It said no one had been injured in the fire and all its staff were safe. The damage is limited to a small section of its warehouse, it added, although it could not say when the site would reopen. The retailer has contacted all affected customers, but there was a mixed reaction on social media.Many expressed support for the firm, with one tweeting that Whilst it may be inconvenient, some more compassion for the business and staff affected might be nice. At Erith, hundreds of robots zip around a grid, collecting groceries and bringing them to members of staff who will pack them into boxes, which are then loaded onto trucks for delivery.