Netflix will now allow its users to remove films and television shows that are ‘clogging up’ the Continue Watching section of the homepage. This is a long requested feature, allowing users to get rid of a list of half watched movies, TV shows they sampled but didn’t enjoy, and boring documentaries.

The new feature has already been made available across the Netflix web, mobile and TV apps, with users simply selecting the offending item in the Continue Watching section, then scrolling down to a new ‘Remove from Continue Watching’ button. There will also be the option to undo this request, if you remove something you wanted to keep, or something a partner or family member wanted to keep. 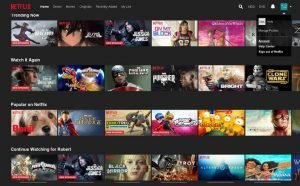 Netflix described the calls for this feature as being like ‘inbox zero’, which is where people attempt to have dealt with all the emails in their mailbox each day. ‘Inbox zero might be hard to achieve on email, but why can’t you bring that same enthusiasm to your ‘Continue Watching’ row.

The firm says the feature will allow users to keep the row fresh, for new shows they are sampling or re-watching – making it easier to find what they want. The Netflix user interface, but it is an important feature, that is a central way users find what they are watching.Continue Watching is among the first things you see when you open Netflix, whether it be on a mobile device, TV or in a web browser on a computer.