Amazon recently updated a couple of its Alexa-based Echo Show smart displays. The new Echo Show 8 saw a couple of enhancements over its predecessor, but the Smaller Show 5 has received an even Smaller refresh.The new Echo Show 5 has a 2-megapixel camera instead of the 1-megapixel sensor of the first model. The device comes in blue as well as black and white color options.Show 8, the new 5 didn’t get a new processor, and its camera doesn’t feature the automatic panning and cropping that the Echo Show 8 and 10 offer.

A compact smart display can be used as a smart alarm clock or a desk companion in a home office. The 5.5-inch 960 x 480-pixel touchscreen is bright and colourful, but not as easy to read from across the room as Amazon’s larger smart displays. It works as a monitor for a security camera or video doorbell. Echo Show supports Amazon Prime Video, Netflix, and YouTube via its browser. 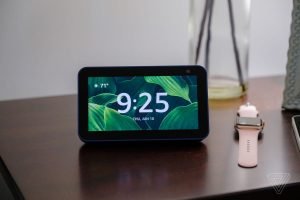 The Echo Show 5 also has a handy feature that lets you tap the top of the device to snooze an alarm, which is easier than trying to say Alexa snooze when you’re half-awake. Amazon is also now selling a Kids Edition model for $10 more. That gets you a custom blue-green-yellow chameleon color, a year’s subscription to the Kids Plus service, and a two-year warranty against accidental breakage.

The Kids Plus service on the Echo Show is similar to what’s available on Amazon’s Fire HD Kids Edition tablets. It allows parents to customize which content and features are available on the devices and tailor them to their child’s age. It will play music from Amazon Music and won’t allow explicit tracks. It also removes certain features like smart home controls from the Show’s touch interface.