Nikon Brings Back the 80s Look in it’s New Launch Nikon Brings Back the 80s Look in it’s New Launch

Nikon is going on the retro aesthetic with its latest Z-series mirrorless camera. The company says the new Z FC, officially styled Z fc, is designed specifically to evoke its FM2 film SLR from the ‘80s, with dedicated dials for settings like shutter speed, exposure compensation, and ISO.The approach is similar to the Nikon DF, a retro-style full-frame DSLR that Nikon released in 2013. But the DF was much larger than the film cameras it was inspired by. The Z FC has a 20.9-megapixel APS-C sensor, which means the camera is far more compact and looks a lot closer to something like an FM2.

Nikon Z FC is a modern camera with broadly similar specs to the Z50. There’s a vari-angle touchscreen, an OLED electronic viewfinder, USB-C charging, SnapBridge wireless connectivity, and the now-requisite ability to use it as a webcam. While the camera can be shot in fully manual mode with the dials, there’s also a switch for PASM operation, and can check aperture settings with a tiny LCD on the top plate. 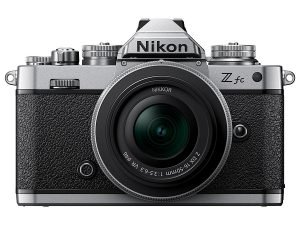 The native ISO range is 100-51,200 and there’s a hybrid AF system with 209 points across 87 percent of the frame. Video isn’t really a focus with the Z FC,, but it can shoot at up to 4K/30fps.As a Z-mount camera, the Z FC will be able to use any of the full-frame lenses that are native to cameras like the Z6 and Z7, but Nikon lineup of DX/APS-C lenses that can make the most of the Z FC’s small size is still lacking.

Nikon is announcing one new prime lens today, however a 28mm f/2.8 will be available in a special edition with styling that makes it look like an older Nikkor D lens. Nikon will also release a silver version of its 16-50mm pancake zoom alongside the Z FC, and says a DX 18-140mm travel zoom will be available at some point this year.The ZFC will cost $959.95 body-only, $1,099.95 with the silver 16-50mm lens, and $1,199.95 with the 28mm lens. All three options will be released in black and silver late July