Samsung Galaxy A50 series is one of Samsung bestsellers over the past few years. The phone is in the $400-$500 range, it’s the perfect middle ground between super cheap phones and expensive flagships. Other devices like the Galaxy Note 20 Ultra and Galaxy Z Flip were making headlines during 2020, last year’s Galaxy A51 was outselling just about every other Samsung product.

The Galaxy A52 5G has been designed for 5G markets like the United States and Europe, while the 4G model is being sold in the rest of the world. The Galaxy A52 5G mirrors the hardware design of many other recent Samsung phones, with its center hole-punch front camera, minimal screen bezels, and plastic exterior. 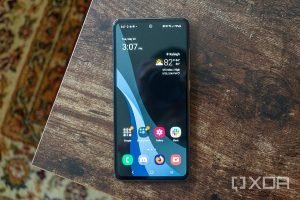 The front of the Galaxy A52 has a 6.5-inch AMOLED screen, which is larger than the display on the base Galaxy S21 but smaller than the one found on the S21+, S21+ Ultra, Note 20, and Note 20 Ultra. Volume and power buttons are located on the right side. The bottom has a single speaker grille, a USB Type-C port for charging and data transmission, and a 3.5mm headphone jack. There’s a 15W wall charger included with the Galaxy A52 5G, and the phone reaches the same 15W speed with standard Qualcomm Quick Charge and USB Power Delivery chargers.

The rear camera of the device is 64MP IMX686 f/1.8, OIS, AF, tetra-binning. The Secondary camera is 12MP f/2.2, ultra-wide, FF  Tertiary: 5MP f/2.4, macro, FF   Quaternary: 5MP f/2.4, depth sensor, FF. Samsung has begun rolling out the May 2021 security patch for Galaxy S21, Galaxy S20 and Z Fold 2 handsets. Apart from the latest security patch, the update also brings improvements to the cameras and quick share function on these devices. The new update is reportedly rolling out to users in Europe first.