Instagram wants to be like TikTok. TikTok is extending the length of its videos to be more like YouTube. Roku seems to be following the Netflix playbook and investing in the original video.The streaming wars are discussed as a competition between the large global legacy media companies Disney, Comcast’s NBCUniversal, AT&T’s WarnerMedia, ViacomCBS, Discovery and incumbent players Netflix and Amazon. As television becomes predominantly delivered over the internet, the competitive lines between traditional media companies and online video services like TikTok, Google’s YouTube, Facebook’s Instagram and Amazon’s Twitch are blurring.

The differentiation that exists today between user-generated content vs. scripted, free vs. subscription, short-form vs. long-form, gaming vs. professional sports is bound to dissipate over time as each company tries to dominate consumer attention.Kirby Grines, founder and CEO of 43Twenty, a strategic advisory and digital marketing firm focused on the streaming video industry said that although it’s still commonplace for consumers and industry execs alike to consider cable and streaming video services as ‘TV,’ and platforms such as TikTok, Facebook, and Instagram as ‘social media,’ they’re the same. They are binary labels that are increasingly becoming antiquated every day. Netflix caught on to this last year when it listed TikTok as a competitor for the first time. In Netflix’s opinion, anything that interrupts Netflix usage, even sleep, is competition. 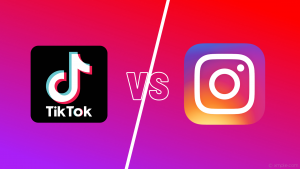 TikTok may have started as a user-generated music-dance video service, but thousands of creators earn salaries scripting videos for the service. These influencers are already becoming A-list celebrities for teenagers, and the crossover between TikTok and Netflix has already begun. It’s one of the reasons that suggested Netflix should consider buying a stake in TikTok when it was temporarily forced into finding potential acquirers last year.