Tiny Crab Preserved in an Amber Lived Among Dinosaur Tiny Crab Preserved in an Amber Lived Among Dinosaur

Fossils trapped in amber have been among palaeontology’s most fascinating finds in recent years — globs of hardened ancient tree resin have captured tantalizing details about spiders, lizards, microscopic animals, insects, birds and even a tiny Dinosaur that are often missing from fossils found in rock. The study was published on Thursday in the journal Science Advances

All these creatures were landlubbers that you might expect to encounter on a tree trunk or branch. Scientists have found the oldest aquatic animal preserved in amber and it’s the most complete crab fossil ever discovered.Javier Luque, a postdoctoral researcher in the Department of Organismic and Evolutionary Biology at Harvard University said that the specimen is spectacular, it is one of a kind. It’s complete and is not missing a single hair on the body, which is remarkable. 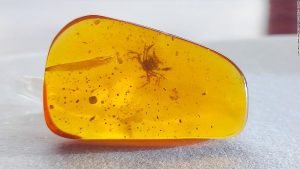 The tiny crab was given the name Cretapsara athanata by Chinese, American, and Canadian experts who worked on the amber specimen from northern Myanmar. The name is a combination of Apsara, a spirit of the clouds and seas in South and Southeast Asian mythology, and the Cretaceous, the Dinosaur-era epoch during which this crab thrived.

The term athanatos comes from the Greek word athanatos, which means immortal, and refers to the species’ lifelike preservation in amber.  The 100-million-year-old creature superficially resembles crabs that scuttle around shores today. Computerized tomography scans revealed delicate body parts like antennae, gills and fine hairs on the mouthparts.