The United States successfully tested advanced technology enabled Hypersonic Missile which can travel five times higher than the speed of sound. Russia and China have already in operations the technology. US conducted the Hypersonic Missile technology at its Wallops facility in Virginia. The US Navy says, it is an important step in development of Navy designed supersonic missile. The test demonstrated the power of technology, prototype systems, and its potential in real time environment.

The US navy stated that it can travel five times higher than the speed of sound. Though the missiles faced some hard challenges in real time environment, its speed and many other operational features are incomparable. US Navy representative stated that China recently has also launched Hypersonic Missile technology. 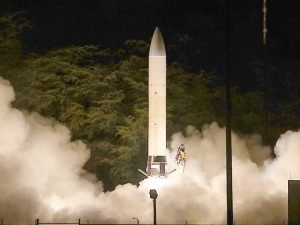 Russia also has the Hypersonic Missile technology. China recently unveiled hypersonic medium range missile which has the ability to carry nuclear warheads and can travel nearly 2,000 kilometers.The representative stating about the launch said that, this missile is different as it can be launched into the orbit before it enters the atmosphere. The missile can efficiently hit its target.

Russia’s Hypersonic Missile is nuclear capable and can travel up to Mach 27. It can potentially change the course and altitude of the missile. Russia had launched its in late 2019.The US Navy and US’ defense system is expected to deploy its first hypersonic weapons by 2025. It will be US’s one the significant steps in strengthening its world power.